In the last few months, KSI has been holding trials with a messaging app called Discord. The transition, so far, hasn’t been great. Many people refuse to even give it a try. This article is written in the hope of shedding some light on the possibilities of Discord.

Lately, I have been gathering opinions from members throughout KSI that have used Discord. The biggest, most negative point that was discovered is that the application is quite complicated to set up.

Once members started using Discord regularly, they were surprised to discover that it was quite simple to navigate. To be honest, almost everyone feels this way. However, there are still quite a few people who have yet to be convinced of its benefits.

Absolutely, the initial set up is difficult. The user interface isn’t exactly perfect and does not need to be so complicated. To invite someone into a chat, servers and links to codes must be sent. Many people feel as though it is a huge waste of time.

However, what people don’t realize is that Discord allows us to log into a secure private server. Online security is of the utmost importance. Clicking a link to gain access to a secure chat room means that each member of the chat is less at risk of malicious people or viruses.

The enhancements as opposed to other popular apps speak for themselves. Discord offers a larger
server limit, allowing for an entire division to be tied in to one chat, yet broken up into many. This allows for more organization, between ranks and squads. Discord also is extremely accessible, via phones and laptops, allowing for a community feel in the squad.

The tagging feature allows for people to be contacted directly if their attention is needed or throughout as big of a big community as KSI. Tagging people in comments is a very attractive feature to have. The amount of communications that are made daily between members, squads, and divisions must be phenominal. Therefore, being able to tag some one is a great feature for a chat app.

Discord also supports voice communication, so, in theory, you could hold a workshop or a meeting; you could use it as a tool for communicating with members who have a hard time attending events. Furthermore, pinning vital information to a squad chat – such as the rank structure or the game night schedule – for the whole squad to see at anytime is valuable for the future and current leaders of this community.

Just try it out!

Sure, Discord is difficult to set up, and quite complicated at first. However, once you get the hang of it, Discord is just like any other messaging app, just with enhanced features. Discord is definitely a step in the right direction. 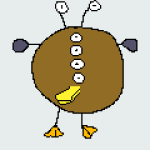