Fallout fans, you can officially rejoice!

Fans of the franchise eagerly awaited the timer to reach zero and found that their wait was worth it, with the Fallout 4 Official Trailer:

So far, the trailer has received good feedback with very few people disappointed. Although, that may just be because it’s been a long time since a Bethesda-developed Fallout has been released, with the last one being Fallout 3, released October, 2008, and they’re just relieved to finally have their hopes met with an actual game.

Regardless, the trailer appears to be very exciting and interesting, with voiceover from the famous actor Ron Perlman, who seems to have more of a speaking role than his usual Fallout intros, ending with those famous words: “War… War never changes.”

The graphics and animations have received a very welcomed overhaul, shown by the opening of the trailer with a German Shepard exploring an abandon home.

All the images and scenes in the trailer were confirmed to be from the in-game engine, so we can expect these graphics and animations to accompany us during actual gameplay.

There were multiple, however brief, scenes of possible locations, characters and enemies that we may come to encounter in the game, many of which look greater in size and detail.

As with any popular upcoming game, the trailer has been met with a lot of questions and speculation. Through the midst of the rapid sequences, people have pointed out a couple of specific scenes to pick apart in hopes to answer some of these questions.

The ones pointed out the most were the images that contained a statue of a man on a horse, strongly resembling the Paul Revere statue, another of a boat, resembling the U.S.S. Constitution, and another of a distinct looking building resembling the Massachusetts State Capitol. This would all be implying that the setting of the game is going to take place in a post-apocalyptic Boston, MA.

This wouldn’t be surprising considering that some of the previous games have hinted at something called “The Institute,” located in that region, as well as the claims that Bethesda employees were seen scouting around M.I.T. However, the Boston setting hasn’t been officially confirmed.

So far, the only gripe that a lot of people have expressed is their dislike that the character at the end of the trailer, whom is assumed to be the player, has a voice. This would be a change from the previous Fallout titles where the player, although having dialogue, didn’t have a voice.

Bethesda will be having their first official showcase at E3 this year, airing on June 14th at 7pm, pct. (10pm, est.) via Twitch, Youtube and other streaming platforms, with the world premiere and more information on Fallout 4 as well as other upcoming Bethesda titles.

“We know what this game means to everyone,” Game Director Todd Howard said. “The time and technology have allowed us to be more ambitious than ever. We’ve never been more excited about a game, and we can’t wait to share it.”

Fallout 4 is going to be released for PC, Xbox One and PS4 later this year. 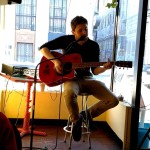