KSI Kenpachi 7 is a Co-Founder in Last Strike, but before that, he was a Founder in Demonic Mayhem. However, Kenpachi’s confidence and knowledge drove him to leave DM to “work his magic” in a division that needed him more.

“He is just so selfless and dedicated to helping KSI as a whole,” says KSI DoomGiver.

Not only is KSI Kenpachi 7 a big idealist, but “he’s never afraid to get his hands in there and really do the dirty work!” DoomGiver said.

From the get go, Kenpachi shows that he is the Alpha male, even though “he really is a big teddy bear in the inside and a great friend”

“When I first met him, I didn’t know how to approach him, he was really assertive, but when I got to know him he was alright,” LS Founder KSI Akame 7 said.

Even though he is a great and tough leader, he really gets to know the people he works with.

“My favorite part about being a Co-Founder has to be the hands-on one-on-one quality time with the general, like you guys become best friends you can say what’s bothering you and they could say what was bothering them,” Kenpachi said.

One of those friends is DoomGiver.

“When we started talking, we became best friends. When he went in for his operation he would call me from his hospital bed and tell me how he was going to die,” DoomGiver said. “He wasn’t like, but he needed the reassurance that he was going to be perfectly OK.”

Even though Kenpachi looks like the fearless leader that he is today, he wasn’t always.

This shows to everyone that leaders aren’t born, but they are made over time and with experience.

“Kenpachi is clearly dedicated to KSI. It’s the way he speaks, you know, you can hear the passion and the drive in his voice,” DoomGiver said.

After 3 years of being in KSI, Kenpachi has shown true moments of motivation, inspiration and true leadership abilities. A million words wouldn’t be enough to even come close of showing how great a person he is, in KSI and out. 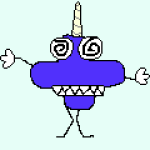