Happy Hour this week was Rocket League Customs held by KSI ImPyyy 7! For those that are unaware as to what  Happy Hour is; Happy Hour is basically a streamed KSI event to all of KSI. This week didn’t have a great turn out as compared to others, only having 6 people coming out. Moreover, Impyyy was all smiles, taking what he had at hand and remaining innovative creating a Free-For-All Rocket League Tournament!

Customs allows players to create their own game using their own rules. In this case, ImPyyy took advantage of this and turned Rocket League into a Free-For-All Tournament. Every one would choose a random team and play like normal, but when you scored you went to spectate until there was only one person left, who would then be eliminated!

Battling it out, until there was only three remaining!

However, in a quick round Silence didn’t quite make the cut to advance to the finals. Leaving only I See Stars and Nebula to battle it out for the crown. The final match only taking 11 seconds, KSI I See Stars taking the victory! In ImPyyy’s own words “The inaugural 1v1v1v1v1 Champion I guess, unfortunately, is Stars”

Wrapping up the night with some Rumble along with some of the other game modes they including, Pinball and Time-warp.

Despite a lack of attendance, it was an event to be envied by all who were not. Filled with shenanigans and laughter, I’d say KSI ImPyyy’s Happy Hour was more than a success.

If you missed the event and would like to view the fun had by all for yourself tune into the stream at:

Also be on the look out for next week’s Happy Hour on December 15th at 9 pm EST. Hope to see you all out there! 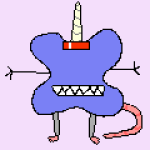